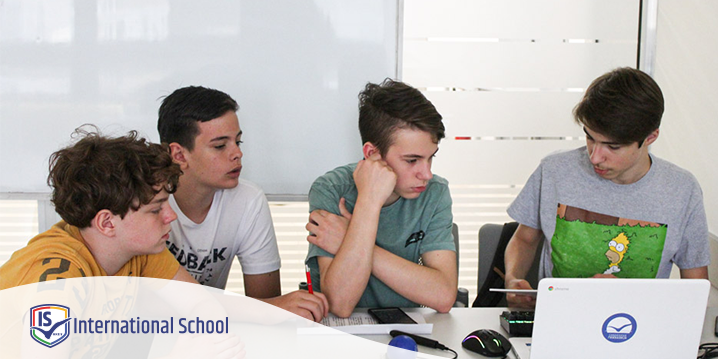 Applications are underway for Brainfinity, a problem-solving and logical thinking competition for secondary school students and primary students in Years 5 through 8, which this spring will bring together young problem solvers from all over Europe including International School students.

Brainfinity is a unique competition where teams of students solve creative and logical problems in a real-life context using all the advantages of information technologies. The competition jury comprises our most renowned teachers and experts in the field of education.

Brainfinity prepares students for success in the 21st century

Last year, Brainfinity brought together many teams from Serbia, Montenegro, Croatia, Bosnia and Herzegovina, and North Macedonia, which enjoyed the challenges and wowed the jury with their creativity, resourcefulness and teamwork.

The aim of Brainfinity is to empower students to adopt the principles of project-based learning and apply the knowledge acquired at school in a familiar and recognisable context.

“Brainfinity taught me that I can achieve whatever I want if I put my mind to it”, says Aleksa Gavrilović, student and winner of Brainfinity 2020.

Students who compete in Brainfinity use their knowledge of physics, mathematics, logic and other subjects in an informal and relaxed environment, and solve problems with the use of computers, phones, iPads and other tech devices. This type of challenge develops children’s research and critical thinking skills, improves their engagement and creativity, and provides them with key PISA skills for the 21st century.

The competition has several stages. In the Brainfinity Challenge students solve Brainfinity problems online from any location, after which they qualify for the finals in Belgrade.

In order to qualify for the Brainfinity Challenge, teams are required to register and solve one of the two problems sent via email after registration.

Brainfinity doesn’t require any preparation or previous knowledge. However, teams that practice on problems that have already appeared in the competition have shown to achieve better results. If you want your team to go through these tasks as preparation for the competition, click here.

Here you can learn more about the rules and regulations.

The teams that make it to the finals may earn extra points with the help of schoolmates, friends and family, through Facebook shares and likes on Instagram. Since this is a competition that encourages student creativity, teams will also get points for the most inventive name and logo.

What makes Brainfinity so unique?

Problem solving is one of the most efficient teaching methods for student development. Unlike traditional school competitions, students who compete in Brainfinity are fully committed; they solve problems without stress or fear of errors, because there is more than one correct answer. They are detectives, little explorers, travellers through time and entrepreneurs tasked with solving a specific challenge. Instead of cramming and mechanical learning, Brainfinity combines knowledge, resourcefulness and teamwork. This competition encourages the development of multiple intelligences in children, so it is suitable for all types of learners: creative learners, logical learners, intuitive learners, analytical learners, etc. Each of them provides a unique contribution to problem solving.

Same as in the most successful education systems in the world, this competition represents a combination of learning and play. Children achieve the best possible results, release their full potential and discover abilities they didn’t even know they possessed, which may be extremely important for their future education.

The best teams will get valuable prizes that will additionally motivate them to go the extra mile, whereas the teachers of the winning team will get a free annual membership for the Institute for Contemporary Education and access to the state-of-the-art educational resources that will help them make a huge step forward in their careers.

Register your team for free!

All primary students in years 5 through 8 and secondary school students are eligible for the competition, and a team may be signed up by anyone. Each team comprises four students and a teacher who will guide them through all stages of the competition. Teams may include students of different grades, and such teams will compete in the age category of the oldest team member.

Grab this opportunity to test your abilities and skills, have fun, win valuable prizes and participate in the competition that has already caused a stir among teachers and students alike.