A Tale of Passion, Loss, and Hope

One would, perhaps, not think it likely based on observing the way teaching unfolds at most schools in our parts, but it is quite possible to stick to the curriculum and infuse the lessons with creative, interesting content that breaks the traditional classroom routine. Such was the time when Year 11A English teacher watched videos recorded by people who attended Jan Blake’s storytelling workshops.

Jan Blake is a world class storyteller, who uses vivid language elements and features and combines them with sounds, instruments and a little help from the audience in order to tell a story. The students would always be amazed by the ease, intensity and passion in her voice, which elicited a lot of comments and discussions. Some of the students even tried out the technique themselves. Of course, it remains a work in progress…

This is one of the stories.

Recently, Year 11A did a lesson about idioms, and while they were trying to figure out the meaning(s) behind numerous phrases, they started communicating with each other only by using the idiomatic expressions they were familiar with.

An idiom is an inevitable – and beautiful – language feature which helps illustrate things and liven up the language, even in an everyday conversation with friends and family. Some claim, not unreasonably, that only when people learn to use idioms and collocations, may they say that they speak the language, says English teacher.

They are important not only for good communication between students, but also for understanding the culture and habits of the speakers.

The lesson was wrapped up with a short video perfectly illustrating the language feature.

A very important part of AS level English is developing a sense of how exactly the spoken and written language works within a phrase, a sentence, a paragraph…

One of the ways to do it is to listen to a story, which you deconstruct later on in order to figure out the author’s intentions. And if the story is brought to life through a short motion picture, the experience is complete. What the teacher tried to do was awake the students’ senses and make them alert, prepare them for all kinds of endings, the unsuspected twists and turns, and make them think about the effects of such elements. Here’s a video titled “The Reader”, which comes with the instructions: if you want, you can pause the video at 1:50 and try to guess how it would end. The English teacher says you would be quite surprised.

They say a picture is worth a thousand words. How many words could a motion picture be worth? Especially an Oscar winning motion picture… International School’s students immediately started guessing the name of the Hollywood blockbuster (or so they thought) the teacher would play for them, so they were quite surprised when she informed them that they would watch the 1956 film The Red Balloon.

This movie plays with imagination and emotions, and helps turn the roles around. At some point, the viewer wishes they could be the director and… well, let’s not spoil the first-hand experience for those who have yet to see this gem.

After watching the film, the students wrote their thoughts on the subject: “The Red Balloon: A metaphor for…”. Perception and reflection sure make a better way to learn a language than mere memorising of rules combined with superficial conversation.

One of the students’ favourite English lessons was the one devoted to the works of Hayao Miyazaki, a renowned filmmaker famous for his anime works. Knowing that Year 10 students are very fond of this genre and familiar with its characteristics, English teacher had little doubt that the topic would quickly catch their interest.

The colourful video full of Miyazaki’s animations brought the topic of the lesson even closer to the students as they listened to the narrator describe the significance of Miyazaki’s work, his storytelling techniques, and the main topics of his works. The students were then engaged in a lively discussion about their impressions of the video.

This activity was followed by a reading task about the “temple” of Miyazaki’s work: the Ghibli Museum, an art gallery and adventure playground in one place, located in Tokyo. The text was a vivid description, which took the students on a tour, showing them the inside of the museum. As they were imagining what this incredible museum had to offer, the students came across different interesting words for describing places.

When they had read the text, the students were asked to imagine they were to give a speech about Hayao Miyazaki, and prepare some notes they would use during the presentation. As a wrap-up activity the teacher chose to revise the vocabulary learnt during the lesson through a Quizlet study set of flashcards she had made for this occasion.

This is just one example how a little creativity pointed in the right direction, towards the students’ own interests and passions, goes a long way in mastering any subject. At International School, it happens all the time. 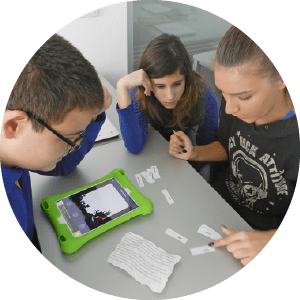 Another rather interesting lesson centered around Halloween was the English language lesson where students wrote poems and stories inspired by some “scary” music. Students closed their eyes and enjoyed the Halloween spirit as they listened to the vampire film theme after which they wrote down the things they associated with the music. They exchanged their ideas in pairs and based their poems and stories around those ideas. English language teacher handed out useful words students could implement in their writing and to enrich their vocabulary. To read the stories and poems that students wrote during this lesson, click here.

They also tried their hand at decoding SOS messages and designing the most enchanted Halloween menu ever.

Unlike the traditional teacher-focused style of lessons, this particular English lesson was just another example of International School’s approach that enables students to draw their own conclusions, exchange their views and learn something new from each other. The unique set of activities included in the class was the perfect way for students to connect different stimuli e.g. music and images and to use words as a means of achieving a specific effect, much like the one that results from music or photography.

During another truly different English class, students had to write content for their chat-room profile. Before that, they watched a presentation on how to create a good profile, how to organise the different topics they are writing about into paragraphs, and what vocabulary they should use. The relaxed atmosphere of the lesson was complemented with the appropriate soundtrack.

Enrolment for class 2021/22 is underway! Click here to register »