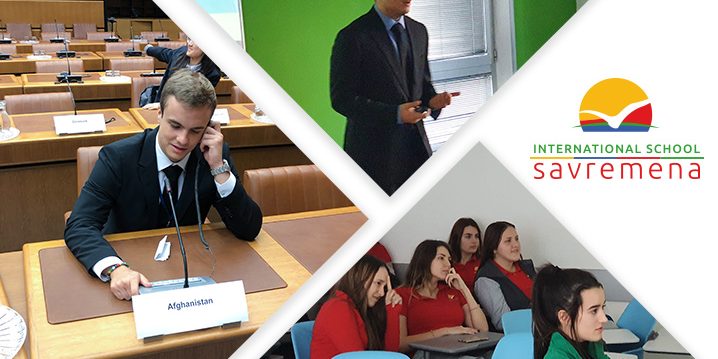 International School Savremena’s Year 12 student, Uroš Jež, gave a presentation and introduced BIMUN to his classmates. As a distinguished and experienced delegate, Uroš welcomed his friends wearing a suit and tie.

When we say experienced delegate, we really mean it. Uroš participated in model UN organised in Romania, Vienna and in Belgrade. In Vienna and in Belgrade he received the best delegate award and honourable mention in Romania. As a delegate in BISMUN, Uroš represented the UK and covered the topic of the Crimea crisis. The topic in Vienna was “Human Rights Violation in the Middle East” and Uroš represented Afghanistan.

Uroš prepared a great presentation highlighting the variety of topics covered in the sessions, the authenticity of the model UN role-playing, as well as the focus on the delegates’ multicultural background. He also shared his behind-the-scenes experience, in particular of the social life during the event and the friendships he made with delegates from all over the world.

Speaking about BIMUN – Belgrade International Model UN, Uroš pointed out that BIMUN offers its delegates a chance to acquire a high level of academic knowledge about current world issues and a possibility to get acquainted with the principles of international cooperation and diplomatic strategies.

Model UN is a simulation of the work of UN bodies, a programme which is being implemented in more than 80 countries as a means of learning about world problems and ways to resolve them within the framework of the UN. In this educational simulation students take on the roles of diplomats, representing different countries and discussing specific topics that are mentioned in the agenda. Participants, as delegates, develop strategies, prepare resolutions, negotiate, solve conflicts, following the procedures of the UN.

Uroš just being Uroš, a hard-working student and enthusiast, made his friends eager to participate and acquire skills they’ll need throughout their careers.