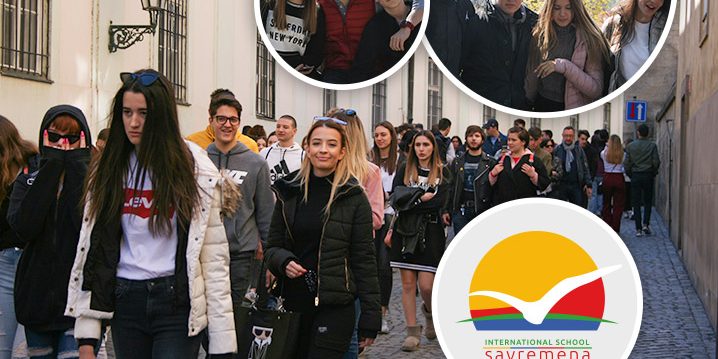 Savremena’s students went on a five-day study trip to Prague, or the Golden City as Charles IV called it, built in the 9th and 10th centuries around the Hradčany and Vyšehrad forts.

Together with their teachers, they enjoyed the tourist attractions and broadened their knowledge in geography, architecture, history, as well as art which places Prague among the most beautiful cities in the world.

Students fascinated by Hradčany, legends and souvenirs at the beginning of the study trip

At the very beginning of this interesting journey, the students visited Hradčany, St. Vitus Cathedral and the Old Royal Palace, after which they headed for Charles Bridge and towards the city centre, where they saw the Astronomical Clock and the Old Town Hall. It would be such a shame to visit Prague and not see Hradčany.

Walking along the Golden Lane, the students learnt about the legend that, during the reign of Rudolf II, alchemists tried to create gold under his supervision. Today, the lane consists of small houses that serve as souvenir shops. One of these, a small house painted blue, was the home of Franz Kafka.

Savremena’s students were delighted not only by these legends, but also by the souvenirs which best represent the city – books, Bohemian glass, beer mugs, paintings and other symbols of Prague.

Savremena’s students most fascinated by Charles Bridge, one of Prague’s greatest attractions

Savremena’s students were most impressed by Charles Bridge. Built from sandstone and completed in 1402, the bridge was originally called Stone Bridge or Prague Bridge, but has been “Charles Bridge” since 1870.

Protected at both ends by gothic bridge towers, it has 16 arches with 30 statues that represent patron saints protecting the bridge and the city itself. One can only have the unique Charles Bridge experience if standing on the very location. Contributing to this experience are the artists playing their instruments or selling their artwork. Legend has it that those who kiss under the great arch of Charles Bridge will remain together forever.

On the third day of the study trip, the students visited Dresden, where they enjoyed walking along the Elbe and visited the Dresden Frauenkirche, the Semperoper and the magnificent Zwinger Palace.

The students took advantage of the nice weather to go for a walk along the mural depicting the rulers of the House of Wettin (102 metres long), which ended in front of Dresden Frauenkirche, a symbol of the city.

The students were most impressed by Frauenkirche, a church dedicated to ‘Our Lady’ that has been the city’s greatest symbol since Dresden rose from the ashes after the carpet bombing in 1945. After visiting the main attractions, the students enjoyed their free time in the city’s attractive shopping zone.

Karlovy Vary – a unique experience to end the study trip

On the fourth day of this adventure the students went to Karlovy Vary, a must-see destination for every person visiting Prague. One of the best-known spas in the world, with 12 main and 300 smaller springs rich in minerals, Karlovy Vary are synonymous with style and sophistication.

The students visited the Dvořák Park and the Jan Becher Museum. They tasted the therapeutic water from the Mill Colonnade, and enjoyed other colonnades as well. The students also visited the impressive Russian Saint Peter and Paul Cathedral and the Grandhotel Pupp, another must-see landmark. To complete the experience, the students also went on a pleasant walk along the Teplá River, where they enjoyed the fantastic architecture in which most buildings resemble castles.

The Czech Republic – an eternal inspiration

Savremena’s students and teachers will cherish the fantastic memories from the study trip that will be talked about at International School Savremena for a long time. In previous years, Savremena’s students visited France, Italy and Austria; this year, they chose the Czech Republic. Impressed by famous tourist attractions, the students will also be able to build on their knowledge of history, art and cultural heritage in regular lessons, by applying the valuable experience gained during this study trip.

More pictures in our gallery.